Up in the high alpine ecosystem there are no trees. The alpine ecosystems are above 11,000 feet in Colorado. The tundras has small insects, and birds. In the winter the snow can build up to 15 feet tall!  The treeline lies 11,000-12,000 feet depending on the slope or the top of the mountain. The Alpine Tundra ecosystem in Colorado or the Rockies as you could say, stand at high altitude where trees usually don't grow. ​

Consumers in the Alpine Tundra 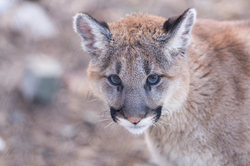 Mountain Lions are one of the Alpine Tundras biggest consumers. They can also be known as pumas, cougars and panthers. They can vary in size and weight. The males can reach up to 200 pounds and eight feet in length with his tail. The females are typically smaller. A mountain lion is not spotted and is a lot of the time tan-ish brown. Mountain lions like to prey on deer, though they also eat smaller animals such as coyotes, porcupines, and raccoons.
Mountain Lions  can be found in many habitats, from Florida swamps to Canadian forests.
Red Fox 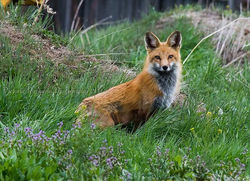 Red foxes are solitary hunters who feed on rodents, rabbits, birds, and other small animals. Foxes will eat fruit and vegetables, fish, frogs, and even worms. If living among humans, foxes will opportunistically dine on garbage and pet food. Like cats, the fox's tail will help it’s balance. In the cold the fox will put its tail over it’s body to keep warm.
Red foxes live around the world in many diverse habitats including: forests, grasslands, mountains, and deserts. 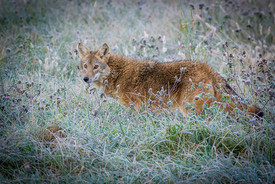 The Coyote is a fierce predator. Modern coyote’s have shown their cleverness by adapting to the changing American landscape, which means the mountains and the dense forest.The Coyote is a member of the dog family and they just used to live in the desert and prairies, but now it has adapted to the harsh winter and mountains and dense forest. In the spring, females give birth to litters of three to twelve pups and they are born in a den. Both parents feed and protect their young and their territory.
The pups are able to hunt on their own by the following fall. A Coyote can be 15 -46 lbs and can run up to 43 mph and that is a adult maximum speed.

Omnivores in the Alpine Tundra 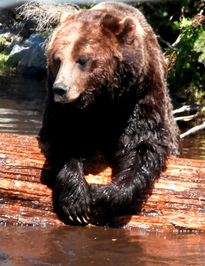 The Grizzly Bear is a powerful animal, it has little to no fear from other predators in its territory.  The tundra grizzly is usually creamy yellow on its back and a brownish chest and limbs. Many tundra grizzlies eat mostly plants, but they also eat rodents and insects. Grizzlies don't usually hunt larger prey. More often they eat abandoned kills of other predators.
Grizzlies can be found on the Alaska and northwestern Canadian tundra.
Arctic Fox
Brown Bear
The Brown Bear lives in the forests and mountains of northern North America, Europe, and Asia. It is the most widely distributed bear in the world.These omnivorous( The Brown Bear eats mainly plants but can eat small fish and other insects) giants tend to be solitary animals, except for females and their cubs, but at times they do congregate. Dramatic gatherings can be seen at prime Alaskan fishing spots when the salmon swim upstream for summer spawning. 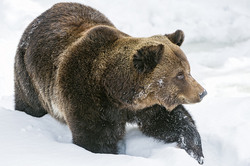 In this season dozens of bears may gather to feast on the fish, craving fats that will sustain them through the long winter ahead.

Herbivores in the Alpine Tundra 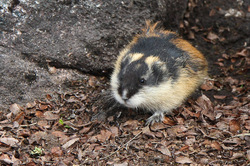 The lemming is one of the smallest animals in the tundra. It is pretty much most animals prey. Because this mouse like rodent weighing 2 ounces to 4 ounces is part of the staple diet of so many animals, changes in population can have serious repercussions.
Their colors vary during summer. In winter, their coats turn white, and they live in burrows under the snow.
Arctic Hare 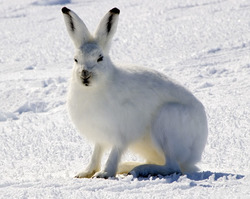 In winter, the Arctic hare's thick fur is almost blindingly white, providing really good camouflage against the ice and snow covering the tundra. It has black eyelashes that protect its eyes from glare. Since it doesn't hibernate, it's roly-poly body shape and relatively short ears help it conserve heat. On average, the hare weighs 6.5 pounds to 11 pounds.
With its long hind legs and snowshoe like back feet, the Arctic hare can clear up to 7 feet in a single bound and run at speeds of 40 miles per hour without sinking into the snow.

Birds in the Alpine Tundra 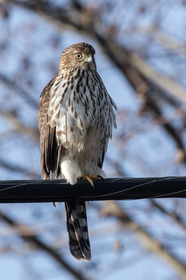 
These raptors have distinctive proportions: long legs, short wings, and very long tails, which they use for navigating their deep-woods homes at top speed in pursuit of songbirds and mice. 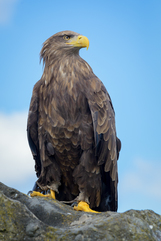 The Golden Eagle is one of the largest, fastest, nimblest ( alive, quickly,light) raptors in North America. Lustrous gold feathers gleam on the back of its head and neck; a powerful beak and talons advertise its hunting prowess. You're most likely to see this eagle in western North America, soaring on steady wings or diving in pursuit of the jackrabbits and other small mammals that are its main prey. Sometimes they have been seen attacking large mammals, or fighting off coyotes or bears in defense of its prey and young hatch lings.
The Golden Eagle has long inspired both reverence and fear 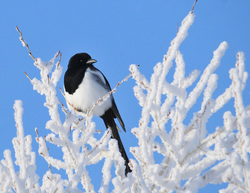 Black-billed Magpies are familiar and entertaining birds of western North America. They sit on fence posts and road signs or flap across range lands, their white wing patches flashing and their very long tails trailing behind them. This large, flashy relative of jays and crows is a social creature, gathering in numbers to feed at carrion. They’re also vocal birds and keep up a regular stream of raucous or calls. 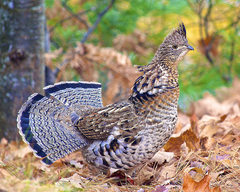 While sage-grouse will feed on wildflowers, insects and forage crops in spring and summer, they depend on sagebrush for food year round, and especially in winter when sagebrush is the only available food source.Mating season is early to mid-March until mid to late May. Females lay between 8-12 eggs and are responsible for creating the nest and brood rearing. Older sage grouse do not pair-bond, they are not monogamous. Outside of mating, males do not take part in raising the young. Eggs and nests can be lost due to disturbances such as bad weather and predators such as ravens, red fox, raccoon and coyote. They are herbivores which means they only eat leaves and other plants.

Impacts in the Alpine Ecosystem

Human Impacts in the Alpine Ecosystem

The tundra ecosystems have been used by humans since prehistoric times. High terraces were used as butchering and camping sites by early hunters over 7,000 years ago. Domestic sheep have grazed tundra areas throughout the Rocky Mountains since the turn of the century. Butterfly populations have been reduced as meadows were overgrazed. Off road vehicles have ruined sections of tundra, as have hikers who do not use established trails.

Plants in the Alpine Ecosystem 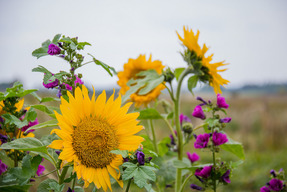 Habitats: The sunflower live in dry areas or prairies and is sometimes considered a weed.

Adaptation: The sunflower has very thick roots and stems.
The sunflower is deciduous because it loses its leaves

They are deciduous. This means they lose their leaves in the fall. They are also low growing plants.
Habitat: They grow best in wet places like by streams and rivers.
Adaptations: They have adapted to live in wet places.

Are they deciduous?
The columbine among many other beautiful flowers is in fact deciduous. (Deciduous: A plant that's leaves fall off in the winter is deciduous.)
What is Their Habitat?
Columbine is found in the  sun and above treeline. It blooms in late spring with red and yellow stems. It is pollinated by hummingbirds and butterflies.
What Are Their Adaptations?
The Columbine lives 6,000 to 10,000 feet up in the air. It is hard for animals to eat it because it is so high up. ​

Are They Deciduous: The polemonium is deciduous which means that they lose their leaves in the fall. But in the summer the flowers bloom beautiful light blue colors.
Habitat: The polemonium native land is grassland, woodlands,and meadows.
Adaptations: It has been able to adapt to live in harsh and rugged environments.

The Purple-fringe usually has multiple stems. Each has a dense cluster of flowers. The flowers are dark purple. The flower has yellow tipped stems that make the flower get a fringed appearance. They bloom from early June to early July.